The holiday season is upon us and Christmas would not be Christmas without tasty food. Every ethnicity has its own unique festive dishes and we decided to share with you the special festive meals Adams team members bring from their native countries.

Let’s start with The Netherlands. There is no specific traditional meal that is a must for Christmas, but our colleague Nicky shares with us what is usually prepared in a typical Dutch family.

The starter is often Garnalencocktail. Garnalencocktail is served in a glass and consists of shrimps and lettuce with a tasty sauce made of mayonnaise, ketchup, whipped cream and whisky. It is seasoned with parsley, pepper, salt and a drop of citrus juice. This starter is followed by meat and champignons or a similar gourmet dish. After that, Dutch people enjoy plenty of sweet treats such as bread with almonds, Oliebollen or Appelflappen.

Our Welsh colleague, Kimberley, says that the star of the show at Christmas dinner in The United Kingdom is turkey. Turkey is not just the main course for Christmas day, but is eaten throughout the Christmas period in dishes such as turkey salad, turkey curry, turkey sandwiches and even turkey with chips! Luckily, the dessert is not made of turkey. The dessert that really embodies the festive spirit is Classic Christmas pudding, Laura adds. The base of a pudding is a variety of dried fruits including apple, raisins, sultanas and candied peel and alcohol. However, what gives a distinctive taste to this dessert is a brandy butter sauce: unsalted butter is mixed with sugar and brandy or cognac and poured over the pudding. Strong, but absolutely delicious! The dish is brought to the table ‘flaming’ for an extra festive touch. 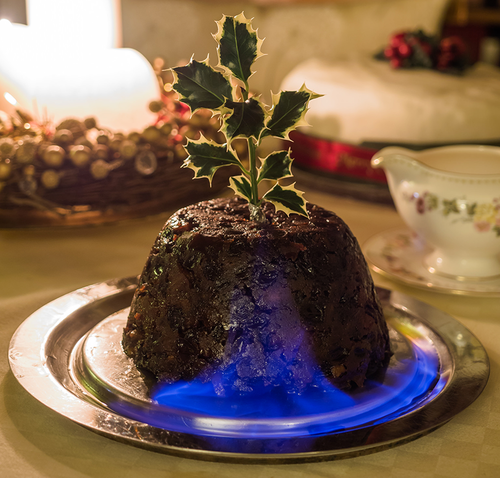 Jennifer tells us that Fondue Chinoise is the meal that marks the whole Christmas season. This popular dish has several elements. The meat, which can be chicken, beef or pork, is cooked in broth together with vegetables. Rosemary, clove and even cognac can be added to broth for a richer flavour. However, the most important part of the meal are the difference sauces, mostly mayonnaise based, such as curry sauce, cocktail sauce or tartar sauce. 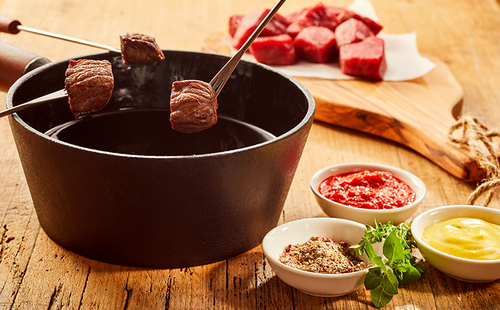 French cuisine is world famous, with each region having their own delicacy. Our French colleague, Audrey, told us about typical Christmas food in Provence. The dinner starts with an apéritif which is Amuse Bouche, small pastry bowls filled with ham, cheese or snails. The starter usually involves 3 choices: Foie Gras, raw oysters or smoked salmon. Foie Gras is usually served as a pâté (goose or duck) with onions and figs. The main course is roasted meat: chicken, turkey, capon or pheasant stuffed with chestnuts. Cheese is the essential part of the Christmas dinner and the perfect plate has cow, sheep and goat cheese. Sweets are served last and in Provence there is a special number of desserts required for Christmas dinner. There should be 13 desserts, representing Jesus Christ and the 12 apostles. The desserts are a combination of nuts, nougats, fresh and candied fruits, such as Pommes d’amour. 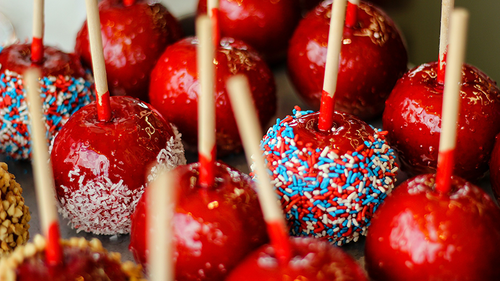 Our Italian colleagues, Alessia and Marcella both agree that the most famous Italian Christmas dish is Panettone. It is a type of sweet bread with raisins and candied citrus peel with a topping made of egg whites and sugar. But the Christmas dinner starts with Antipasto: plates full of olives, different types of cheese, ham, marinated vegetables, mushrooms and crusty Italian bread or rosemary sticks. After that, Italians serve baked pasta. It can be lasagna or ravioli filled with spinach and ricotta, although that varies from region to region. Red meat, roasted chicken or sausages are often served as the main course. 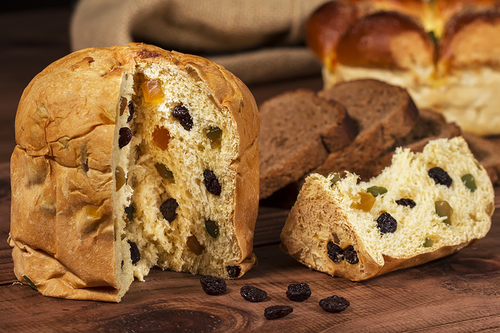 Catalans are well known for their meat dishes and Christmas is time to show the best. Anna tells us that the Catalan festive dinner starts with Pollastre Amb Escamarlans, a chicken and shrimp meal. However, the dish Catalans are especially proud of dates back to the 14th century and it is called Carn d’olla. A piece of meat is slowly boiled together with various vegetables and served on a tray. Of course, it is always toasted with Cava, sparkling rose or white wine. 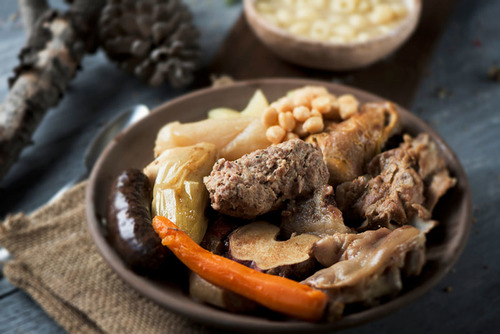 We have many colleagues from Eastern Europe and talking with them we realised how many similarities there are between their countries in terms of Christmas cuisine and customs. But of course, there are also some differences.

Monika shares with us interesting Christmas food-related customs that are unique to Poland. The Christmas Eve dinner is called Wigilia and has 12 dishes. It is served when the first star appears on the sky and there is always one extra plate for unexpected guests or passengers in need. The day before Christmas is a day of fasting, so meat is not allowed on the table. The guests first share a special waffle, Opłatek, and exchange good wishes. After that, a special soup is served, Barszcz Wigilijny, a type of beet soup with little dumplings. The main part of the feast involves various fish meals prepared with onions, mushrooms and sour cream. Of course, since Pierogi is an essential part of Polish cuisine it is not omitted during the festivities. 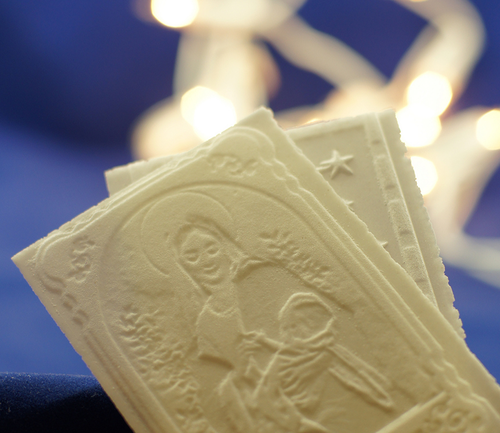 Our colleague Edina describes a typical Hungarian Christmas dinner as very hearty. A fisherman’s soup is an inseparable part of the Christmas custom although it is served on Christmas Eve as a part of fasting. This dish is made of local river fish with lots of hot spices and paprika. But Christmas dinner on the 25th of December is full of meat. The main courses are Töltött káposzta, fermented cabbage rolls stuffed with minced meat, and roasted pork. The dessert is usually Bejgli, a type of rolled dough filled with poppyseed, walnuts or chestnuts. Yummy! 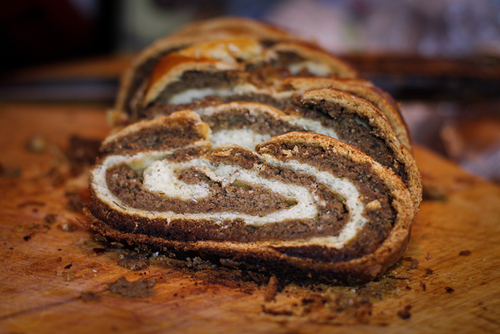 The Romanian cuisine also has cabbage rolls, called Sarmale. As in Hungary, this meal has an important place on the Christmas table, says Florin. However, Romanians have another old recipe to add to the Christmas festive: Piftie. This dish is traditionally made of pork and vegetables boiled together to form a soft, jelly mass. Although it takes some time to prepare, Florin assures us that the end result is worth it! And in terms of festive drinks, Romanians usually serve home-made red wine. 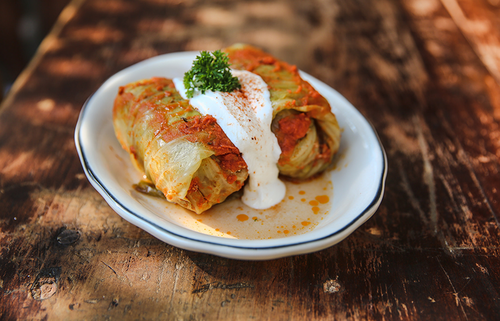 Anastasia tells us that most of Moldovan Christmas recipes have characteristics of both Romanian and Russian cuisine. As in Romania, people in Moldova prepare a jelly-like dish called Racituri, but instead of pork, the main ingredient is roosters’ meat. Another well-known meal is Shuba, which means herring under a fur coat. A pickled herring is layered with mayonnaise, boiled eggs, potato and carrots. The beet is also added which gives the meal a distinctive cyclamen color. Delicious! 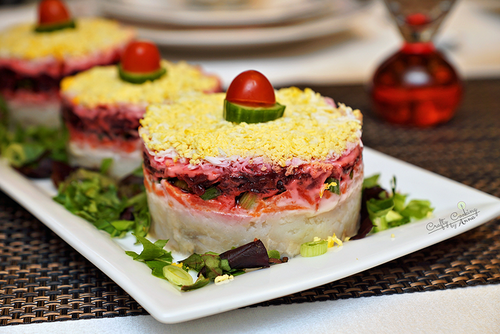 Orthodox Christians, such as Serbs and Russians, do not celebrate Christmas on the 25th of December, but on 7th of January, as according to the older, Julian calendar. Nevertheless, whatever the date, Christmas food is just as important!

As her colleagues from other Eastern European countries, Ljiljana mentioned cabbage rolls, Sarme, as part of the Christmas feast and pork as a main dish. However, Serbs do have a special Christmas cake, called Česnica. In northern parts, the cake is made out of a thin dough layered and filled with raisins, walnuts and sugar or honey. In the rest of the country, it is usually a bread-like cake with just a hint of sweetness, decorated with a pastry cross, leaves or braids. A person preparing the cake will hide a coin and the one who finds it will be happy and rich for the whole of the next year! 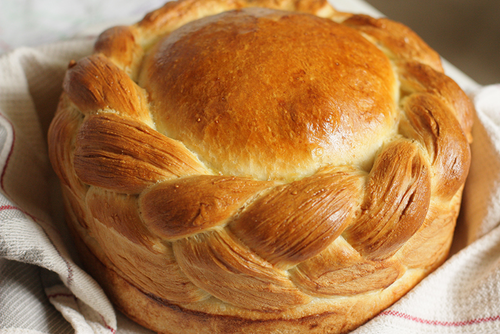 Julia says that both Christmas and New Year cannot pass without Оливье or Russian Salad, a winter dish that most Eastern Europeans consider an important part of the festive feast. Оливье is made of boiled vegetables (peas, carrots, potato) mixed with ham, boiled eggs, mayonnaise. Mustard is optional, but most people use it to accompany the dish. Bread with butter and caviar is another must for Russians. Following the starters, the main course is served: pan-fried potatoes and mushrooms with roasted pork. It is served with Соленья, a type of fermented salad that mostly includes pickles, tomatoes and peppers. 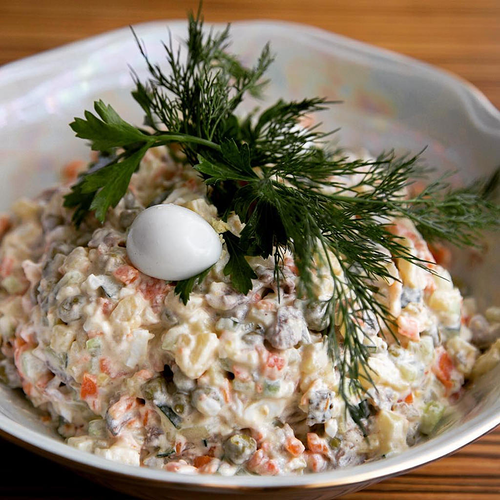 Greeks celebrate Christmas with chicken soup, pork dishes and plenty of sweets. The central part of the festive fare is Christopsomo, which means Christ’s bread. Only the finest ingredients are used to make it: olive oil, flour, raisins, walnut, pine seeds and red wine. It is often decorated with a cross and various symbols that represent wellbeing. Besides the special bread, Androniki and Georgia mention other sweets. Melomakarona is a type of winter cookie with orange and cinnamon. Although not a part of the Christmas table but prepared for New Year’s Eve, one of the most important festive meals is Vasilopita: orange and vanilla cake, with a hidden coin. The finder of the coin will be granted happiness throughout the whole year!

In Venezuela, one of the most popular Christmas meals is Pan de Jamón, a bread with a slightly sweet taste, Raquel tells us. The dough is home-made and stuffed with thinly sliced smoked ham, olives and raisins. Hallacas Venezolanos or Venezuelans Tamales are then served. Tamales are made of corn-based dough and stuffed with chicken meat, pork and beef as well as tomatoes, peppers, onions and seasoned with smoked paprika, shallots and sliced almonds. Traditionally, the stuffed dough is steamed in banana leaves or a corn husk, but nowadays baking foil will do the trick. The preparation of Hallacas Venezolanos can take several hours and requires advanced cooking skills, but it definitely makes an impression! 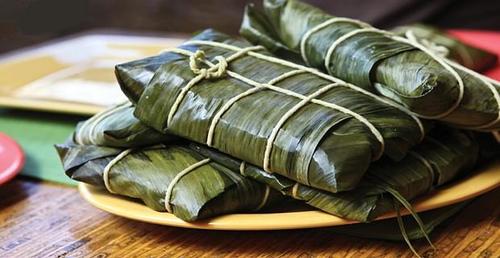 In Brazil, Christmas dinner is served late on Christmas Eve. Exactly at midnight, family and friends will toast and wish each other a Merry Christmas. Elisa says that the main course is a big turkey served with different rice dishes: rice with broccoli, raisins or almonds. But a truly unique part of the feast is Farofa, a fried meal made of manioc flour, butter and spices. Besides that, a Brazilian Christmas table is full of grapes, cherries and different types of green salad. 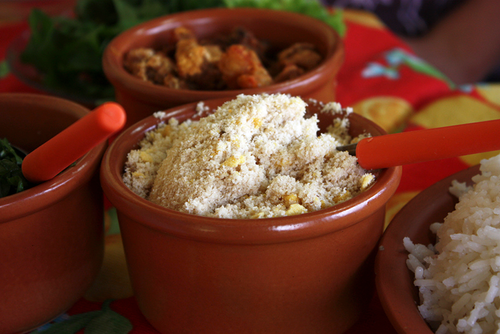 Filipino cuisine is quite diversified due to its colonial history and many scattered islands. Michelle says that the typical Noche Buena (Christmas Eve) includes Hamon and Queso de Bola. Traditional Filipino ham, Hamon, is glazed with pineapple syrup which gives it a distinctive sweet taste. Queso de Bola means “a ball of cheese”, and in this case, it is a variation of Dutch Edam cheese, but what makes it unique is a red waxed coat. Although these meals are more in line with Western European festive traditions, Filipinos have their own special Christmas recipes: Bibingka and Puto Bumbong. Bibinka is a special rice cake prepared with coconut milk, margarine and sugar while Puto Bumbong is made of rice, fresh coconut and brown sugar. What really makes this sweet so unique is its purple colour that comes from a special type of purple glutinous rice. Both sweets are commonly sold by street vendors near churches during Misa de Gallo (Christmas Eve mass). 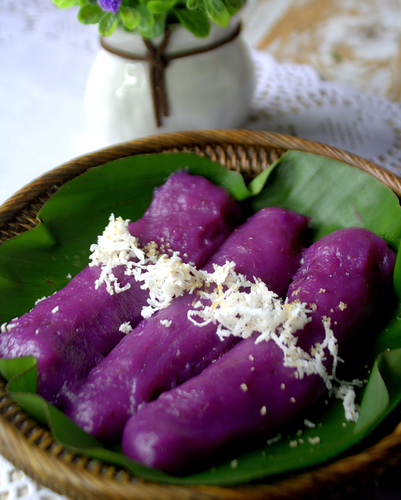 Since Christianity is not one of India’s main religions, Christmas not widely celebrated in India, however, Sandhya told us that winter cookies with raisins and cinnamon are sold everywhere and Indian people love them!

Christmas is a time of giving and sharing, family and friends gathering and enjoying tasty food. We shared traditions from our countries and we hope that you find them inspiring. We wish you a holiday season surrounded by loved ones and a time when you can forget your worries and embrace the Christmas spirit. We wish you all a very Merry Christmas!